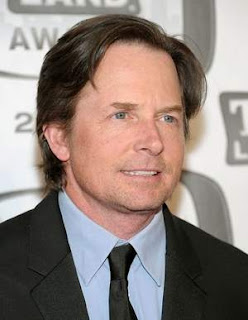 From the Democrat & Chronicle:

Michael J. Fox told an audience at Rochester Institute of Technology that he didn’t save any memorabilia from the set of Back to the Future.
“I was a fool. I thought the movie would be terrible, would suck, so I didn’t save anything,” he said. “But I think I have some stuff fromTeen Wolf.”
Fox spoke to an audience of 5,100 at RIT’s Gordon Field House and Activities Center this afternoon, and his speech was sprinkled with light anecdotes about his early career as a starving actor and his breakthrough as Alex P. Keaton in Family Ties. But while he added some words of wisdom and encouragement throughout, a moving moment came near the hour’s end, when a young woman told him that she’d watched one grandparent suffer through Parkinson’s disease, and then a second.

The second grandparent, whose diagnosis came more recently, has a much better quality of life. And that was because of you, she told Fox.
Known best for many years as Back to the Future’s Marty McFly, Fox said he has taken on the role as the “reluctant poster boy” of Parkinson’s disease.
At the age of 29, Fox recalled waking up one morning after a night of drinking — “Woody Harrelson… is always a problem,” he quipped — and was unable to stop his hand from shaking.
He initially chalked it up to the hangover, but his hand continued to quiver. He eventually saw a doctor and got his diagnosis.
About seven years passed until he told the public in 1998, and the reaction to his revelation brought a national discussion about Parkinson’s disease into the mainstream, he said.
The Michael J. Fox Foundation for Parkinson’s Research has since raised and invested more than $150 million in Parkinson’s research.
“My sister-in-law had early onset Parkinson’s as well, and my brother didn’t want anyone to know at all,” said Marianne Knowles, a Boston resident who was visiting her daughter at RIT. “So I like that (Fox) was so open about it.”
While he spent much of the hour talking about Parkinson’s, there was, of course, still plenty of time on Saturday to share stories about his career. On the set of Family Ties, he met his future wife, Tracy Pollan, who was playing a love interest. They had met only recently, and Fox told her before a scene that her breath didn’t smell very good.
Posted by WVTT News Radio at 7:40 PM