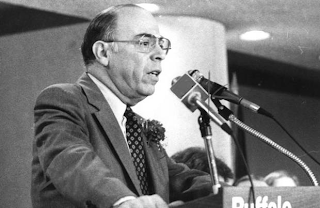 From the Buffalo News:

Murray B. Light, a key figure in the history of Buffalo journalism who served as editor for 20 of his 50 years at The Buffalo News, died Friday, on his 85th birthday.
During a career starting as a reporter in 1949 and ending with his 1999 retirement, Mr. Light directed coverage of a city and its people with a keen devotion to ethics and principles. He guided The News into an era of modern technology, introduced the Sunday edition, won a battle for survival with the rival Courier-Express, saw News cartoonist Tom Toles win a Pulitzer Prize, and set the stage for the Internet age in which The News maintains a major presence.


"Murray Light was one of the last of the old school of editors who lived to beat the competing paper while demanding his staff charge ahead," said News Publisher Stanford Lipsey. "He made an invaluable contribution to The Buffalo News over the 50 years he was here. I was privileged to work with him."
Above all Mr. Light was a newspaperman, reveling in the opportunity to be at the center of the action, and at times, helping influence the shape of local events. Though diminutive in stature, he strutted around his newsroom like a general — barking orders, backslapping colleagues, and shaping the newspaper's daily content and editorials, while occasionally sneaking a smoke in the men's room.
He has alternately been labeled pugnacious, a street fighter, a keen observer of politics and government, and a consummate fan of the Buffalo Bills. He reveled in the company of top executives, governors and presidential candidates seeking the blessing of The News, but saw the newspaper's real mission as speaking for its readers in the face of the rich and powerful.
"Murray set a strong example as a no-nonsense, hard-driving editor whose trademark bluster concealed a fair-minded, ethical journalist and a patriotic citizen committed to a free press and free speech," said News Editor Margaret M. Sullivan, whom Mr. Light hired in 1980 and who succeeded him in 1999.
Light was also a family man, devoted to his wife, Joan, and their three children. He was delighted that his son, Jeff, followed him into newspaper journalism and is now the editor of the San Diego Union-Tribune.
His weekly column — Your Newspaper — sometimes dwelled on such mundane topics as the comic strips appearing in the pages of The News. But he understood such matters as an important part of the business he loved, and most often devoted the column to praising the myriad of staffers who contributed every day to the publication of a daily newspaper.
But most of all he was devoted to the journalistic principles of the business. He was quick to defend his staff in his legendary battles with foes like the late Mayor James D. Griffin, or to even back them in court on matters of press freedom.
In 1979, while addressing a group of advertising executives, Mr. Light summed up his views when he said: "The News will not sensationalize to create a headline. We will not, through reference or emphasis, play to the emotions of a segment of our readership and in the process denigrate, dismay or demolish the reputation of a group — whether it be civic, political or ethnic.
"We will not use our news columns to reinforce and/or espouse the causes of our editorial page. The News wants to sell newspapers ... but we will not attempt to do so by yielding to expediency and destroying our news integrity."
Born in Brooklyn, the son of a Garment District businessman, Mr. Light never lost his New York accent despite living more than 60 years in his adopted hometown. He served as an Army scout in the Pacific at the close of World War II, returning home to earn a bachelor's degree from Brooklyn College in 1948 and a master's in journalism from the Medill School of Journalism at Northwestern University in Chicago in 1949.
He immediately dove into the newspaper business, working as a stringer for the Brooklyn Eagle, copy editor for the New York World Telegram, and in 1949 was hired by Editor Alfred H. Kirchhofer (whom he respected and often quoted) as a reporter for The Buffalo Evening News. Through the years he rose through the ranks as swing editor, assistant makeup editor, assistant news editor, news editor, managing editor for news, and in 1979 — editor.
He oversaw introduction of popular features like Gusto, the weekly entertainment section; launched the morning edition of The News after the Courier's demise, and hired a major influx of staff to produce it.
When Omaha investor Warren E. Buffett bought The News in 1977, he soon directed Light and his staff to launch a Sunday newspaper. Mr. Light often described that venture as "the most exhilarating challenge of my entire career."
Buffett turned to Mr. Light again in 1999 when he retired as editor of The News. He commissioned him to write a history of the newspaper, published in 2004 as "From Butler to Buffett: The Story Behind The Buffalo News." He told the story of the newspaper's early days, its role during Buffalo's zenith, and its evolution into the modern era. The result was the definitive history of The News, complete with the observations of the man who was there for half a century.
Through his long career Mr. Light was also deeply involved in the community. He held offices and memberships in several professional organizations, including being past president of the New York State Society of Newspaper Editors. He was also honored by scores of business, civic, social and charitable organizations. One of his most treasured accomplishments was to be chosen for a nominating jury of journalism's coveted Pulitzer Prizes in 1990 and 1991.
Mr. Light served on the advisory council to the journalism department at St. Bonaventure University and has served on the Community Advisory Council of the University at Buffalo.
He was a member of the American Society of Newspaper Editors and the Associated Press Managing Editors Association. He also was appointed a member of the State Judicial Screening Committee for the Fourth Department by former Gov. Mario M. Cuomo, who also named him to the New York State Temporary Commission on Constitutional Revision in 1994.
Mr. Light was also asked on many occasions to speak before community groups and college ceremonies, receiving awards from St. Bonaventure, Buffalo State College, Villa Maria College, Daemen College as well as Nichols School.
In addition to his son and his wife, Mr. Light is survived by his daughter Laura Arbogast. His daughter Lee died in 2003.
Posted by WVTT News Radio at 7:29 PM