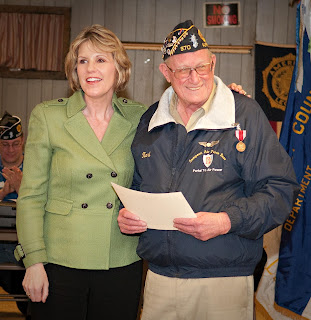 
Fifty years after U.S. Air Force Retired Second Class Airman Karl Grantier retired from the military, he received a medal and certificate recognizing his service.
During a meeting at the Angelica American Legion on Thursday, Senator Catharine Young presented Airman Grantier with the Good Conduct Medal and a Cold War Recognition Certificate.
“Airman Grantier served three years, four months and 15 days in the United States Air Force, and it is a tremendous honor for me to present this medal and certificate to him. He, like all our veterans, deserves our utmost respect, and I am grateful for the opportunity to thank him for his courage and dedication,” Senator Young said.
Mike Hennessey, Director of the Allegany County Veterans Service Agency added, “I think it’s important for all our veterans to see the medals due them, no matter if they’ve been out of the military for 50 years.  I appreciate the Senator’s office in helping to obtain them and present them. It means a lot to the veterans for the Senator to do that.”
Airman Grantier enlisted in the United States Air Force in 1955, during the height of the Cold War. After completing basic training at Sampson Air Force Base near Geneva, N.Y., he trained as a jet engine mechanic on F-86 Saber jets, F-89 Scorpions and T-33 Shooting Star trainers at Amarillo Air Force Base in Texas.
Following his training in Texas, Airman Grantier served with the 3550 th Combat Crew Training Wing (Interceptor) at Moody Air Force Base in Georgia where he helped train air crews to intercept enemy bombers and used Strategic Air Command bombers for realistic combat-like intercept targets.
Three years into his enlistment, while Airman Grantier performed routine aircraft maintenance duties on a Lockheed T-33 Shooting Star that was being refueled, a massive explosion occurred, the aircraft caught fire and was destroyed. Airman Grantier suffered severe burns and was transferred to the 3700th USAF Hospital, Wilford Hall Medical Center, at Lackland Air Force Base in Texas for surgery, burn treatment and rehabilitation.
Following his treatment, he was placed on the Temporary Disability Retired List on October 29, 1958. He was also referred to the VA for further care before being formally and honorably retired from the U.S. Air Force on March 31, 1960.
“I think it’s great to be getting the medal and certificate. When I was in the hospital, I didn’t know if I was qualified for them, but I’m quite happy to be receiving both,” Airman Grantier said.
Upon returning to Allegany County, Airman Grantier served as Post Commander for the Alfred American Legion. He also acted as a delegate and committee member of the Allegany County American Legion Committee. Airman Grantier continues to reside in Almond where he operates a local trucking company.
Airman Grantier received the federal Cold War Recognition Certificate that goes to members of the armed forces and qualified federal government civilian personnel who faithfully and honorably served the United States any time during the Cold War era, which is defined as a period lasting from Sept. 2, 1945 to Dec. 26, 1991.
Senator Young also presented Airman Grantier with a Good Conduct Medal, which is awarded to any enlisted member of the United States military who completes three consecutive years of service, honorably and faithfully. The Air Force Good Conduct Medal was authorized by Congress on July 6, 1960, but not created until June 1, 1963.
Posted by WVTT News Radio at 11:55 AM