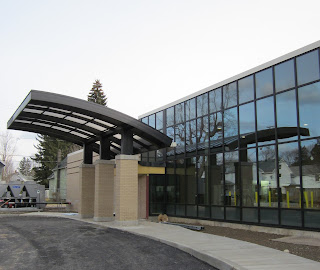 ’s new currently under construction and an architectural rendering of the center.


Even after her death in 2010 the generosity of long-time Olean resident Mildred Milliman lives on through the fund she created at the Cattaraugus Region Community Foundation. From that fund 35 local and national nonprofit organizations received grants this month that totaled more than $195,000.

The , one of Ms. Milliman’s passions in life, is the lead beneficiary of the Mildred Milliman Fund. The CRCF board of directors approved a grant for $157,794.00 from the fund to the hospital for 2012.
According to Karen Fohl, OGH Vice President for Institutional Advancement, this year’s grant will contribute to the hospital’s latest campaign – the creation of a new .
The is a $10.3 million project consisting of a 15,174 square foot addition and a complete renovation of 6,384 square feet of existing space at , located across from the hospital’s main campus. A grand opening event is slated for May 2012.
“We are profoundly grateful to ‘Millie,’ as we affectionately called her, for her transformational philanthropy,” Ms. Fohl said. “This state-of-the-art will positively impact the care we are able to offer for generations to come. She would be so pleased to know that her investment also helped attract many critically needed surgeons and specialists to our community. She was all about helping others. I only wish she could be here to see what she helped to accomplish.”
Since its establishment in 2001, the Mildred Milliman Fund, which previously was named Anonymous Fund to protect her privacy, has distributed more than $2 million in gifts to the local and national charities named by Ms. Milliman, said CRCF Executive Director Karen Niemic Buchheit.
“Millie was one of our community’s most exceptional philanthropists, ever since she anonymously established a fund with the Community Foundation in 2001,” said , Community Foundation board president. “Shortly before her death she gave us permission to recognize her generous donation publicly. She truly created a legacy with her fund and the Community Foundation is proud to continue her philanthropic vision.”
The CRCF board last year recognized Ms. Milliman’s lifetime generosity and exceptional philanthropic vision with its Friend of the Foundation award in 2011.
Ms. Milliman’s decision to set up an endowed fund with the Cattaraugus Region Community Foundation with a $6 million donation continues to make a permanent difference for more than 30 local and national charitable organizations, according to Ms. Buchheit.
The Mildred Milliman Fund’s annual beneficiaries who also received grants recently include the SPCA in Cattaraugus County, Town of Olean Fire Department, Allegany County SPCA, Roswell Park Cancer Institute, the Foundation’s Beautification Fund, American Red Cross, Salvation Army, Alzheimer’s Association, American Cancer Society, American Foundation for the Blind, American Heart Association, American Kidney Fund, American Lung Association, American SPCA, Best Friends Animal Society, Blinded Veterans Association, Camp Good Days & Special Times, Cystic Fibrosis Foundation, Easter Seals, Eastern Paralyzed Veterans, Guiding Eyes for the Blind, HOPE Foundation, Humane Society of U.S., International Fund for Animal Welfare, Leukemia & Lymphoma Society, March of Dimes, Muscular Dystrophy Association, National Anti-Vivisection Society, National Epilepsy Foundation, National MS Society, National Wildlife Federation, Paralyzed Veterans of America, St. Jude Children’s Research Hospital and World Wildlife Foundation.
Established in 1995, The Community Foundation is growing good by connecting donors to the causes they care about most in our region. Grants from the foundation support many areas including education, scholarships, health care, the arts, community development, human service and youth development. To learn more, call, email or visit us online at www.cattfoundation.org
For more information, contact the Community Foundation at (716) 372-4433, email foundation@cattfoundation.org or visit www.cattfoundation.org. Find us on Facebook at www.facebook.com/cattfoundation.
Posted by WVTT News Radio at 7:00 AM