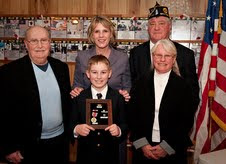 Before Lewis Morehouse passed away in September 2011, he received some, but not all, of the medals he earned for his service with the United States Navy during World War II.  Gunner’s Mate, 2nd Class Lewis Morehouse received all of his honors posthumously on Friday at Chautauqua County’s Regional American Legion meeting where Senator Catharine Young (R,C,I – 57th District) presented John Morehouse and Jean Milliman, the children of Petty Officer Morehouse, with the World War II Victory Medal, a Combat Action Ribbon, an Honorable Service Lapel Pin, and the U.S. Navy Honorable Discharge Lapel Pin.“I am inspired by Petty Officer Morehouse’s dedication to his country.

To present his children with these medals, which are long overdue, is an honor. I am grateful for the opportunity to commemorate one of the many veterans who selflessly served this nation,” Senator Young said.  “This honor is well-deserved. It’s bittersweet that Petty Officer Morehouse isn’t here to receive it himself. We wanted to make a big deal out of it, and it’s important that people understand that their veterans are still serving veterans. The American Legion strongly advocated for the recognition of Petty Officer Morehouse’s service. The more we can acknowledge service the more we remember their service. Everyone in the Legion is a veteran, and we all could have been there. We all had the opportunity to serve,” said Henry Link, Commander of John W. Dill Post 434 and the Third Vice Commander for Chautauqua County Legion.  Petty Officer Morehouse entered into active service on March 5, 1942, and attended training in Newport, R.I., Great Lakes, Ill., and Norfolk, Va. Following his training, Petty Officer Morehouse served on the USS Greene in the North and South Atlantic. While stationed on this ship, Petty Officer Morehouse took part in Operation Dragon, the invasion of Southern France during the second stage in the invasion of France. The USS Greene also acted as an escort during the Battle of Okinawa, Japan where it stood as an antisubmarine picket. The ship also performed escort duties between Okinawa, Saipan and the Philippines until the fall of 1945. Petty Officer Morehouse also took assignments on the USS John Hood, DD655, which was part of the invasion force in Japan and remained there as part of the occupation forces. He accepted further duties on the USS Thomas J. Gary, which picked up prisoners of war at the dock and transported them to larger ships where they traveled home.  After serving with the Navy for four years, and nine months, Petty Officer Morehouse was honorably discharged at Charleston, S.C. on December 14, 1946.  Petty Officer Morehouse previously received the American Area Campaign Medal, Asiatic-Pacific Campaign Medal with two bronze stars, Presidential Unit Citation, Good Conduct Medal, and European-African Campaign Medal with one bronze star. During the American Legion Meeting, Petty Officer Morehouse’s daughter and son accepted the Combat Action Ribbon, which is awarded to members of the Navy, Marine Corps and Coast Guard who actively participated in ground or surface combat where the member was under enemy fire or engaged in bona-fide ground or surface combat firefight, and the performance while under fire was deemed satisfactory.  Petty Officer Morehouse never knew he earned this ribbon, which recognizes his service on the USS Greene. The Navy sent the award to Senator Young’s office at the time of the request for the World War II Victory Medal. The World War II Victory Medal is awarded to all members of the Armed Forces of the United States or the Government of the Philippine Islands who served on active duty in World War II at any time between December 7, 1941 and December 31, 1946.
Ms. Milliman and Mr. Morehouse also accepted the Honorable Service Lapel Pin, which is awarded to all World War II veterans, and the U.S. Navy Honorable Discharge Lapel Pin. “I am very proud of my dad, and I think he’s a great person. He was very close to a couple of World War II guys that go to his church. He was well-liked and made friends easily. He never really talked much about the war, but I think he deserves to get the medals, and I am very honored to accept them with my brother,” Ms. Milliman said.
Posted by WVTT News Radio at 11:37 AM